To share your memory on the wall of Edward Heinhold, sign in using one of the following options:

Print
Edward J. Heinhold, 82, of Rockville, MD, died on Tuesday, April 14, 2020 at home.
He leaves his wife of 50 years, Barbara (Barnard) Heinhold, as well as four daughters, Catherine Heinhold, of Washington, DC, Alison (Peter) Melley of Gaithersbu... Read More
Edward J. Heinhold, 82, of Rockville, MD, died on Tuesday, April 14, 2020 at home.
He leaves his wife of 50 years, Barbara (Barnard) Heinhold, as well as four daughters, Catherine Heinhold, of Washington, DC, Alison (Peter) Melley of Gaithersburg, MD, Noelle (Michael) Fell of Annapolis, MD, and Meg Notaro. He was Opa to Sara, Liam, Aidan, Kevin, and Patrick Melley. He is also survived by his siblings Rosemarie (Clem) Quinlan, of Massapequa, NY, and James (Florence) Heinhold, of New Bern, NC.
Born July 18, 1937 in New York, New York, Ed was the son of Kurt Joseph and Bridget Ann (Geatons) Heinhold. He grew up on Long Island, and in his early years helped in the family butcher shop/grocery store, the Lawrence Avenue Market. After graduating from Brooklyn Preparatory High School in 1954, he attended the Polytechnic Institute of Brooklyn and received a Bachelor of Chemical Engineering degree in 1960 and a Master of Science of Chemical Engineering degree in 1963. He then went to work as a chemical engineer at DuPont, where he would spend his entire career. After completing his Master of Business Administration degree at Widener University in 1978, he worked as a business analyst.
Ed met Barbara at a CCD (religious education) teachers’ conference in Darlington, New Jersey in 1969, and they married later that year in Camden, NJ. They lived in Alloway, NJ until 1975, when they moved to Wilmington, Delaware. Edward and Barbara retired to State College, Pennsylvania in 1997 and then moved to Maryland in 2007 to be closer to family.
Ed had a passion for his Catholic faith and for science, especially astronomy and the natural world. He was an active volunteer in his local parishes serving variously as a CCD teacher, Eucharistic Minister, lector, minister to the homebound, RCIA Director, and parish finance council member at St. Joseph Catholic Church in Woodstown, NJ, St. Mary Magdalen in Wilmington, DE, the Noonday Mass community in downtown Wilmington, Good Shepherd Catholic Church in State College, PA, and St. Rose of Lima, in Gaithersburg (where he also managed the cemetery). He served as the vice-chairman for the Diocese of Altoona-Johnstown Commission on the Laity, and along with Barbara received the Prince Gallitzin Cross Award in 2002 in recognition of service to the church and community.
A lifelong amateur astronomer known for waking his young daughters in the middle of the night to view a lunar eclipse, Ed bought himself a computerized telescope with a 10-inch reflector as a retirement gift. Soon, he was active in the Central Pennsylvania Observers, organizing events for the public to go stargazing at a local state park. The telescope also made an appearance each Halloween at the bottom of the driveway so that trick-or-treaters could take a peek at the moon.
Also during retirement, Ed volunteered with the Centre Volunteers in Medicine (CVIM) clinic in State College where he began the Medication Assistance Program, which helps people in need apply for free medications from pharmaceutical companies. In 2005, CVIM named Ed Volunteer of the Year and a year later the Centre Council County for Human Services also recognized his leadership in community service.
Ed was deeply devoted to his wife Barbara, always making her feel loved and accepted. His love for his daughters knew no bounds. He made sure that they knew they could be and do anything they aspired to in life and supported them in their efforts. He was known to family and friends as a good listener and a humble man, who nevertheless enjoyed debating such topics as theology, philosophy, and the English language.
Due to current health restrictions, a private Mass of Christian Burial and interment will be held at St. Rose of Lima Catholic Church in Gaithersburg, MD on Friday, April 17. A larger memorial service will be held once restrictions are lifted. In lieu of flowers, if you would like to make a donation in Ed’s memory, please consider JSSA Hospice at jssa.org/hospice or St. Rose of Lima Catholic Church at strose-parish.org.
Read Less

Receive notifications about information and event scheduling for Edward

Show you care by sending Flowers

Donations are being accepted for: JEWISH SOCIAL SERVICE AGENCY.

We encourage you to share your most beloved memories of Edward here, so that the family and other loved ones can always see it. You can upload cherished photographs, or share your favorite stories, and can even comment on those shared by others.

Posted Apr 21, 2020 at 11:46am
I was so sorry to hear of Ed's passing when I read his obituary in the Centre Daily Times. Although I did not know Ed well, I really enjoyed getting to know him and work with him and Barbara at Good Shepherd Parish. ED was such a devoted person and was so knowledgeable about the Catholic faith. he was a true gem. My sincere condolences to Barbara and the rest of the family. My thoughts and prayers are with you. Jim Nolan
Comment Share
Share via:
TH

Posted Apr 19, 2020 at 09:29am
My condolences to the Heinhold family and especially to Barbara. I remember Ed and Barbara as special friends from St Joseph Parish in Woodstown N.J. and good times at their house on Alloway lake. Rest in peace,Ed
Comment Share
Share via:
KB

Posted Apr 17, 2020 at 05:38pm
The most memorable memories I have of Uncle Ed are usually him reading, while we played. He had a quiet temperament, and when he spoke his voice was calming and the conversations were always interesting. I remember how he towered over me, but it reminded me of a gentle giant (of course I was a small child) and his presence was calming when he was in the room.

This poem by Georgia Harkness is fitting for my memories of Uncle Ed when I was a child:
"A giant pine, magnificent and old
Stood staunch against the sky and all around
Shed beauty, grace and power.
Within its fold birds safely reared their young.
The velvet ground beneath was gentle,
and the cooling shade gave cheer to passers by.
Its towering arms a landmark stood, erect and unafraid,
As if to say, “Fear naught from life’s alarms”.
It fell one day.
Where it had dauntless stood was loneliness and void.
But men who passed paid tribute – and said,
“To know this life was good,
It left it’s mark on me. Its work stands fast”.
And so it lives. Such life no bonds can hold –
This giant pine, magnificent and old.
Comment Share
Share via: 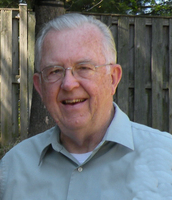